Jump to Recipe Video Print
5 from 4 votes. Leave a review!

This recipe for eggless ladyfinger cookies is fully vegan and creates a deliciously crisp biscuit, perfect in tiramisu or served with coffee. Ladyfinger cookies take some work to make vegan, but the results are worth the effort, especially if you use the cookies for a rich and delicious vegan tiramisu!

Ladyfinger cookies rely heavily on eggs for their texture (crisp yet light and airy). It’s possible to replace eggs, but there’s a few steps required!

Ladyfingers are commonly used to create tiramisu, which is exactly what I like to use this recipe for. They can also be enjoyed with a cup of coffee or tea.

While I try to keep my ingredient lists simple with items I know are easy to find, this recipe calls for a few less-common vegan alternatives. It’s likely you can find all this at a typical grocery store, you may even have everything on hand!

I also usually provide ingredient substitutions but with a slightly tricky baking recipe like this, I’d highly recommend following the ingredient list exactly.

How to Make Ladyfinger Biscuits without Eggs

Eggs are a critical ingredient in traditional ladyfinger recipes. Replacing them may seem impossible, but with a few unique ingredient swaps, anyone can enjoy egg free vanilla sponge biscuits!

This recipe requires a light touch and lots of whipping. A stand mixer is very helpful, but you can use a hand-held electric mixer instead.

The first step is measuring aquafaba. I use a 19-ounce can of no salt added chickpeas which produces at least ½ cup of aquafaba. That amount is perfect for this recipe.

Pour the aquafaba into a stand mixer bowl with a whisk attachment and whip the aquafaba for 3-4 minutes, until it’s white and fluffy.

Stop mixing, scrape down the edges and add the cream of tartar.

Return to whipping the aquafaba at high speed and very slowly pour in ¼ cup of granulated sugar. Pour the sugar in extremely slowly; the ¼ cup should take at least a full minute to pour in (it feels like a long time when doing it).

After the sugar is in, stop mixing so you can scrape down the edges of your bowl before resuming whipping the aquafaba at high speed for another 1-2 minutes. The aquafaba should be very white and fluffy at this point and hold its shape.

Remove the whipped aquafaba into a large mixing bowl.

Add the margarine and remaining sugar into your stand mixer bowl with whip attachment. Slowly increase the whipping speed until you’re at full power and whip the margarine until it becomes lighter in color and appears fluffier.

You’ll need to stop once or twice to scrape the edges of the bowl and scrape up margarine from the bottom so it all becomes whipped.

Next, add the vanilla extract and whip once again, until incorporated.

At this point, carefully add ¼ of the whipped aquafaba and whip this into the margarine at high speed for about 1 minute.

Stop, scrape down the edges of the bowl and add in another ¼ of the whipped aquafaba (about ⅓ of the aquafaba that is left; the goal is to add about half the aquafaba into the margarine). Whip once again until everything is incorporated.

Scrape the margarine-aquafaba mixture into the mixing bowl with the remaining whipped aquafaba. Begin folding these mixtures together, with the lightest touch possible. This recipe relies on the whipped aquafaba to hold its fluffy texture since nothing else is used to create a fluffy ladyfinger cookie.

Once the margarine and aquafaba is partially folded, sift in the corn starch and ¾ C of flour. Begin carefully folding these dry ingredients into the whipped aquafaba-margarine.

Once this is partially mixed, sift in the remaining flour. Fold very gently until the flour is completely mixed in and there are no dry clumps of flour visible. Stop mixing as soon as you reach this point.

Prepare a piping bag with a ½ inch round tip. If you don’t have this tip, simply cut a ½ inch hole into the bottom of your bag after it’s filled.

Fill the piping bag with ladyfinger batter. The easiest way is to place the piping bag in a tall glass and fold the top of the bag over the edge of the glass.

It’s okay if you can’t fit all the batter in at once. Simply pipe half the ladyfingers before refilling the bag, then continue.

Prep a baking tray by covering it with a silicone baking mat or parchment paper.

Carefully pipe the ladyfinger cookies so they’re about ¾ inches wide and 3-4 inches long. Leave at least an inch or two of space between the cookies.

Once you’ve piped the ladyfingers, bake them in an oven preheated to 350 °F for 17-20 minutes, until the bottoms are slightly golden brown.

When the ladyfingers come out of the oven, they’ll be quite soft. Let them rest for a minute or two on the baking tray before carefully transferring to a wire cooling rack to cool completely, about 2 hours.

The ladyfingers become firmer and crisp as they cool.

If serving as-is, dust the tops of your cookies with some icing sugar. If using for a tiramisu, leave as-is and proceed with that recipe!

How to Serve these Biscuits

These cookies are nicely sweet, perfect to serve with coffee or tea. Typically, ladyfinger cookies are used to make tiramisu so check out my vegan tiramisu recipe!

How to Store Leftover Ladyfingers

Leftover ladyfingers should be fully cooled before transferring into an airtight container. You can store them on a counter for up to 3 days. If you’d like to keep them up to a week, store in your fridge.

If using the ladyfingers for tiramisu, keep refrigerated. 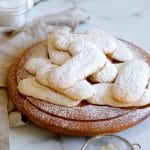