Jump to Recipe Print Recipe
4 from 1 vote. Tried this recipe? Leave your review!

This vegan pulled pork recipe is made with jackfruit and creates a delicious sandwich served topped with creamy coleslaw. It’s packed with tasty BBQ flavors from a homemade sauce.

This recipe is fantastic to serve to anyone because pulled jackfruit can truly satisfy even the most meat-loving people you know! Vegan pulled pork sandwiches truly confirm that you can make anything vegan and unbelievably delicious.

I had no idea what jackfruit was before going vegan. Initially I was able to try fresh jackfruit which has such a unique flavor I immediately loved it. Then I tried a BBQ jackfruit pulled pork sandwich at a local restaurant and was instantly hooked!

The texture of jackfruit is amazingly similar to pulled pork and is the perfect alternative when you crave that meaty barbecue taste.

It’s very easy to use jackfruit as a vegan pulled pork alternative. The structure of jackfruit pulls apart into loose strings making it simple to achieve the “pulled pork” texture.

What Type of Jackfruit to use for Pulled Pork

There are four main types of jackfruit you can purchase:

Can you Use Jackfruit Canned in Syrup for Pulled Pork?

For the longest time, the only jackfruit I could find was sweet jackfruit canned in syrup. I do not recommend using this type of jackfruit for making a vegan or vegetarian pulled pork alternative.

Jackfruit canned in syrup is picked at peak ripeness (at its sweetest) then canned in sugary syrup. This would create extremely sweet pulled “pork”.

When making vegan pulled pork, we want a savory, smoky and salty flavor. It would be near impossible to hide the sweetness of jackfruit in syrup no matter how much seasoning or salt you try to add.

Jackfruit canned in syrup is great for dessert, but not for pulled pork.

I recommend using jackfruit canned in brine for this vegan pulled pork recipe. Brine is simply salt water which helps remove much of the sweet flavor from the jackfruit.

What’s left is a jackfruit with mild flavor that can easily take on the taste of whatever you cook it in.

Most jackfruit canned in brine is young green jackfruit. This means the jackfruit isn’t at peak sweetness when picked which is yet another help when making a savory meal with jackfruit.

There’s also the option of using jackfruit canned in water. I’ve personally never used this so can’t comment on how it would work in this recipe. This isn’t a product I’ve seen at local stores but is an option if you’re shopping online.

Can you Eat the Core of the Jackfruit?

When you open a can of jackfruit in brine you will see a bunch of triangle shaped pieces of jackfruit. Each triangular piece has flesh that easily pulls apart into strings, and these pieces will be attached to a firm core.

I couldn’t find a reason why people do this, other than the texture of the core isn’t the same as the main part of the fruit and the core doesn’t pull apart. But if you discard all the core pieces, you may notice that you’re wasting a lot of the can’s contents.

I never discard the core pieces; instead, I collect them in a bowl and finely slice them so they become similar to the pulled pork texture.

Can you Eat Jackfruit Seeds?

While pulling apart the jackfruit you’ll also notice that there are oval shaped bits throughout. These are jackfruit seeds.

Again, several internet sources say to dispose of jackfruit seeds when making pulled jackfruit sandwiches because of the texture, but the seeds are edible.

When eating raw jackfruit people save seeds to roast, but with canned jackfruit, the seeds are cooked in the canning process.

I can’t find any direct information whether there is concern with eating these seeds or not, but if they can be eaten roasted, I imagine they are okay to eat canned.

I include jackfruit seeds in my vegan pulled pork. This is mainly because I don’t like wasting and I haven’t had any issues with eating them. I just rip the seeds into pieces with my hands. You could also chop them up to add to your vegan pulled pork as well.

So, when I provide the amount of jackfruit for this vegan pulled pork recipe, I’m including both the core and the seeds from the can. All I discard is the liquid in the can, but I use all the pieces of the fruit, core, and seeds.

This vegan pulled jackfruit sandwich recipe is quite low in protein, especially compared to a pork alternative.

While it’s perfectly ok to sometimes consume a meal that is lower in protein, there are some people who need to have higher protein intake or some who want to eat a more balanced meal.

The easiest and tastiest way to boost protein in your vegan jackfruit recipes is by adding lentils. The lentils could be cooked from dry, or drained and rinsed if from a can.

The lentil’s small size makes it less noticeable and doesn’t impact the texture of the pulled jackfruit sandwich as much as other, larger, beans or legumes would.

Jackfruit is often touted as a perfect alternative to meat. If talking strictly about taste and texture compared to pulled pork, I would say yes, jackfruit is a fantastic vegan pulled pork alternative. However, despite the fact that people state jackfruit is high in protein, it’s not.

Every can of jackfruit in brine has slightly different nutrition information, but from the 4-5 varieties I’ve purchased, there is, on average, about 2 grams of protein per ½ cup of fruit. That’s not a lot of protein. It’s not even high in protein compared to other fruits.

If you’re looking for a high protein meal, add some lentils or other protein source to your jackfruit.

Print Pin
4 from 1 vote. Tried this recipe? Leave your review!

To make the pulled jackfruit:

Accuracy of nutrition information cannot be guaranteed (certain ingredients may not have all nutrients listed in the database); amounts may vary (and will vary depending on brands of ingredients used); all nutrition fact values rounded to the nearest whole number. This recipe analysis does not include serving on a bun (only includes the BBQ jackfruit and the coleslaw). 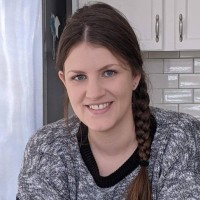 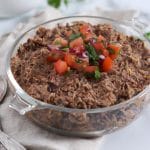 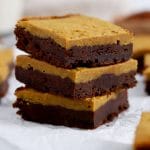 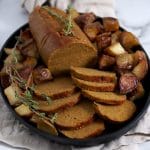