Jump to Recipe Video Print
5 from 4 votes. Leave a review!

This vegan apple turnovers recipe is easy to make with a delicious, lightly sweetened apple filling covered in buttery, flaky phyllo pastry. Any pastry can be used for this recipe, but to keep it vegan, make sure it’s dairy free and eggless!

Apple turnovers are a delicious dessert (sometimes breakfast) made by wrapping cooked apple filling in pastry. Turnovers are often shaped into triangles although they could also be rectangular or square.

Traditional turnover recipes are not usually vegan because the apple filling contains dairy (butter), and the pastry contains eggs or dairy.

Making apple turnovers vegan is quite simple. Select a vegan butter or margarine when making the apple filling and use a store bought or homemade pastry that’s dairy free and eggless.

This dairy free and vegan apple turnover recipe is simple to make and requires only a few basic ingredients. They include:

How to Make Vegan Apple Turnovers

Making apple turnovers is simple and requires only a few easy steps.

To prep the apple filling, peel then dice 4 cups of apples (4-5 medium apples) and place them into a small pot. You can cut the apple pieces as large or small as you like. I prefer small apple pieces since it’s easier to fill and fold the turnovers.

Add vegan butter, brown sugar and cinnamon to the pot of apples then cook on medium heat until the apples are soft but still holding together. This takes 8-10 minutes, depending on how large the apples are cut (and depending on the heat of your stove!).

Set the apples aside to cool slightly while you prepare the pastry.

Phyllo pastry is simple to use in this vegan apple turnover recipe. It creates a super flaky, crunchy and buttery wrapper for the apple filling.

To prepare phyllo pastry, make sure the pastry is thawed completely. Simply take the frozen pastry out of the freezer for 30-60 minutes before using.

When thawed, carefully pull apart 12 sheets. Try not to tear the pastry, but it’s okay if there’s a few tears since you’ll fold it in half. You only need half of each sheet to be tear-free.

Melt ½ cup of vegan butter or margarine and brush half of the phyllo sheet lightly with this melted butter. Try to coat the entire half, right to the edges, but it can be a thin layer. ½ cup of butter should be enough for 12 sheets with leftover to brush on top of the finished turnovers.

If you run out of melted butter, just melt some more. This means you’re using more than I do, which is perfectly fine; your turnovers will be super buttery!

When half the sheet is covered, fold the non-buttered half over the buttered half. This creates a double layer of pastry with melted butter between.

Repeat for all 12 sheets of phyllo.

Once the phyllo is ready (folded in half with melted butter in the middle) it’s time to fold the turnovers.

On one corner of a phyllo sheet add 1 ½ to 2 tablespoons of apple filling. Fold this corner over to create a triangle that comes halfway into the center of the short edge.

Next, fold the triangle over itself until there’s no phyllo left (see images/ video since it’s hard to explain with words).

Once all turnovers are folded, brush the tops with remaining melted butter.

Preheat your oven to 350 °F and bake for 10-12 minutes. The phyllo should be lightly golden brown and crisp.

It’s best to bake one tray at a time on the center rack. If you must put 2 trays in at once, try to get them onto the same shelf. If this isn’t possible and you have 2 trays on separate racks, just rotate (move the tray on the higher rack to the bottom rack and vice versa) halfway through to ensure even baking.

Step 5: Drizzle Icing on the Turnovers

Allow your vegan apple turnovers to cool completely before drizzling on icing.

To prepare the icing, mix icing sugar with vanilla extra and plant-based milk. The icing should be thick; this helps it not drip off the turnovers too much.

At first it may not seem like enough liquid but keep stirring and all the icing sugar should dissolve. If there’s just not enough liquid, you can add extra plant-based milk or water one drop at a time (literally one drop as it doesn’t take much to overdo it).

Use a spoon or piping bag to drizzle icing onto your cooled turnovers. If you don’t have a piping bag but want nice drizzle lines, scoop the icing into a plastic food storage bag. Cut a small hole into the bottom corner of the bag to use as a makeshift piping bag (this is what I did in the video).

There are many ways to make delicious vegan apple turnovers. Phyllo pastry is not the most common option for turnovers, but I really like the super crisp texture, and flaky, buttery layers. It’s also easy for me to find vegan phyllo at the grocery store.

Other pastry options for your vegan turnovers include:

There’s lots of other variations for this recipe as you can use any fruit-based pie filling. You can also get creative with spices! Adding ground nutmeg to this apple filling is delicious!

How to Refrigerate and Reheat Apple Turnovers

Allow turnovers to cool before storing in an airtight container for up to 4 days on the counter, or in the fridge for up to a week.

Reheat cold turnovers in the oven (or use toaster oven) at 350 °F until you reach your desired eating temperature. Microwaving cooked phyllo dough will make the pastry soggy. 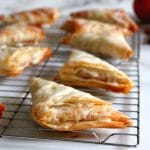