Jump to Recipe Video Print
5 from 3 votes. Leave a review!

This vegan tiramisu recipe makes for a truly decadent dessert. It features homemade ladyfingers soaked in coffee and Kahlua layered between a rich and creamy cashew and coconut cream.

Since tiramisu traditionally uses eggs and dairy-based ingredients, it takes some work to make vegan. Don’t let this stop you; it’s completely worth it when you take a bite!

Tiramisu is a delicious, classically Italian dessert made with layers of crisp vanilla cookies between a rich, creamy and fluffy mixture. Its ladyfingers are flavored like coffee by dipping them in espresso (or coffee) sometimes along with some type of alcohol.

The creamy layer is typically made with mascarpone cheese and whipped egg whites, with other flavors added in. Some recipes use whipped cream instead of whipped egg whites. The top of tiramisu is traditionally sprinkled with cocoa powder.

Ladyfingers usually rely heavily on eggs for their texture and aren’t commonly vegan. To make vegan tiramisu, start by making (or buying) a batch of vegan, eggless ladyfingers!

For the vegan cream layer, I use cashew cream along with whipped coconut cream to replace mascarpone and whipped cream/ egg whites. This cashew coconut cream is incredibly rich and lightly sweetened, with a slightly fluffy texture.

None of the ingredients on this list are difficult to find; I can buy them at my local grocery store without issue! Most ingredients are essential but there’s a few substitutions to note:

How to Make Tiramisu without Eggs or Dairy

I usually keep my recipe quite simple, but sometimes extra effort is worth it. This recipe isn’t terribly complicated, but it takes some time because the cashew and coconut cream needs to set overnight.

Before starting on vegan tiramisu, have a batch of ladyfingers cooked and completely cooled! If you can find vegan ladyfingers at the store, you can certainly use those.

For the tiramisu cream layer, you’ll need cashews that are fully soaked (overnight is best or at least a few hours in hot water). Even with a high-speed blender, you need the water content of fully soaked cashews to get the right consistency, so don’t skip this step.

Whipping coconut cream works best when the can of coconut milk is cold, so refrigerate it for at least a few hours before using.

Essentially, on day one, prep the ladyfingers, get the 2 cups of raw cashew soaking and place the coconut milk can in the fridge. You can also do this in the morning before assembling later that evening.

Add the coconut cream to a deep bowl and whip with an electric beater on high speed for about 2 minutes. Then, add cream of tartar and whip this in. Scrape down the bowl’s edges each time you stop the beaters.

Slowly add in the sugar as you continue whipping the coconut cream. Once the sugar is incorporated, scrape the edges again and start slowly whipping in the vanilla extract.

Drain the soaking cashews and add to a high-speed blender along with plant-based milk, lemon juice and salt.

Blend on high speed until this mixture is extremely smooth and creamy. Scrape down the edges of your blender a few times to make sure there aren’t any clumps of cashews.

Then scrape this mixture out of the blender and into the bowl of whipped coconut cream. Carefully fold these two mixtures together until fully incorporated. Folding slowly and carefully helps the coconut cream hold its airy, whipped texture.

Alternatively, you can add the whipped coconut cream to the blender. Blend it, on high speed, into the cashew mascarpone.

To assemble, have your ladyfingers, cashew-coconut cream, a small flat-bottomed dish, along with the serving dish you’ll assemble the tiramisu in. I use a 9-inch square glass baking dish to assemble my tiramisu.

In the small, flat-bottomed bowl, mix the coffee and Kahlua.

Take a ladyfinger and quickly dip it into the coffee mixture. Coat both sides of the ladyfinger in coffee but don’t let the cookie soak. It should be in and out of the coffee within a second or two (too long creates a soggy cookie and mushy tiramisu).

Place the dipped ladyfinger into the bottom of your serving dish. Continue until you have a full layer of ladyfingers across the bottom. You may need to break your cookies into smaller pieces to get the best fit.

Then, pour on half of the cashew-coconut cream mixture and spread into an even layer.

Next, carefully add a second layer of dipped ladyfinger cookies, placing them onto the cashew-coconut cream. Set them down lightly and try to not press them into the cream layer.

Once you have a full layer of ladyfingers, pour the other half of the cashew-coconut cream over top of the ladyfingers. Gently spread this cream layer until flat.

Refrigerate the tiramisu so its cream layer can set fully. This takes at least 4 hours, but it’s best to chill overnight.

Once set, top the tiramisu with a generous sprinkle of cocoa powder, about 2 tbsp. Simply scoop some cocoa powder into a sifter and shake over the top of the tiramisu until completely covered.

To recap, this recipe is easiest to make over 2-3 days.

For a three day timeline:

On day one, soak the cashews and place the canned coconut milk in the fridge. Make the ladyfingers so they have plenty of time to cool.

On day two, make the cashew coconut cream layer and assemble the tiramisu, leaving off the cocoa powder (best to add this after the cream sets).

On day three, sprinkle with cocoa powder and serve.

For a two day timeline:

On the morning of day one, soak your cashews in hot water and refrigerate the canned coconut milk. Prep the ladyfingers and allow to cool through the day.

Later in the day or evening, assemble the tiramisu by making the cashew coconut cream.

Allow the tiramisu to set overnight in the fridge and on day two you’ll be ready to sprinkle with cocoa powder and serve.

How to Serve this Vegan Tiramisu

This tiramisu needs to be served cold and refrigerated between serving. Don’t let it sit out because the cream layer can become runny.

If taking this tiramisu somewhere other than your house, partially freeze it (place into freezer for a few hours so it’s extra cold but not completely frozen). If possible, transport in a cooler with ice packs.

How to Refrigerate and Freeze Vegan Tiramisu

Refrigerated leftovers will hold up for at least 3 days. If you’ll need to keep it any longer, it’d be best to freeze it.

You can freeze the full, assembled tiramisu by covering it with plastic wrap then placing either into a large freezer bag (if it’ll fit) or cover the layer of plastic wrap with a layer of tin foil. It can stay in the freezer for up to a month.

If you don’t need to freeze the full tiramisu, place portions into a freezer safe, airtight container. These individual portions can also last up to a month in the freezer. 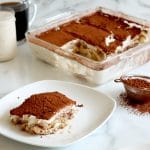 *Select a full fat canned coconut milk and try not to shake the can. Allow it to chill in the fridge for at least a few hours (overnight is best). The only ingredients in the coconut milk should be coconut and water. **I haven’t tested this recipe with any other type of plant-based milk and cannot guarantee it would work/ set properly. Accuracy of nutrition information cannot be guaranteed (certain ingredients may not have all nutrients listed in the database); amounts may vary (and will vary depending on brands of ingredients used); all nutrition fact values rounded to the nearest whole number.