Raspberry peach crisp is the ultimate vegan dessert. This recipe uses a nutritious crumble topping; not only is this crisp amazingly tasty, it’s also a balanced option when you want a sweet treat. Full of fiber and vitamins while low in added sugar, this vegan raspberry peach crisp recipe is my go-to dessert.

Not only does this vegan raspberry peach crisp taste amazing, it’s super simple to prepare and you can use fresh or frozen fruit!

In the summer, fresh raspberries and peaches are in season and fairly cheap (at least where I live). Raspberries have always been my favourite fruit and peaches are a close second, so the combination tastes perfect to me!

If it’s winter, fruit tends to get more expensive and less widely available. Since it’s out of season, the quality of fruit also suffers. Therefore I rely more heavily on frozen fruit.

Frozen fruit is amazing because it’s often allowed to ripen on the bush/ tree and frozen shortly after picking. This preserves much of the nutritional quality so you won’t miss out on anything but a higher price tag! In contrast, when fruit is out of season it’s often picked before it’s ripe and ripens as it travels. This could lead to less nutritional value by the time you eat it.

I’ve made this vegan raspberry peach crisp recipe using both fresh, frozen and a combination of fresh and frozen raspberries and peaches.

When it comes to the raspberries, I didn’t notice a difference between using fresh or frozen. The taste, texture and end result of frozen raspberries were the same. The only noticeable difference is longer cooking time (see notes in recipe below).

For peaches, the biggest difference between fresh and frozen is slice size. Frozen peaches available where I live come in thick slices. This increases cooking time and impacts texture.

I prefer peaches in my crisp sliced more thinly than what I get frozen. The large pieces never cook through how I like them, and if I bake the crisp longer, the crumble topping is overcooked.

To get around this, I’ve tried letting the frozen peaches thaw first, slicing them in half or thirds and then cooking. This method works really well for me!

How to Make a Nutritious Crumble Topping

A superior crisp recipe is really only as good as the crumble topping. While there’s nothing wrong with making a less nutritious crumble, this balanced version is just as tasty to me so I don’t feel like I’m giving anything up!

Crumble topping is often made from some type of oats, flour, sugar and butter. To make this more balanced, I’ve simply changed some ingredients for ones that pack more nutritional value!

Instead of all-purpose flour, I use whole wheat flour which has more fiber and almond flour which adds healthy fats, vitamins, minerals and a touch of plant-based protein. The almond flour also adds amazing flavor especially as it bakes and the almonds toast!

I’m still using sugar for this recipe, but only in the crumble topping as opposed to adding sugar to the fruit too. This is a dessert after all, and I like things to be sweeter. Raspberries tend to be on the tart side, so they could use a bit of sugar to balance that out.

There’s also margarine in this vegan crumble topping. Butter is often used in non-vegan recipes and I also see coconut oil as a common substitute. A lot of people don’t view margarine as a healthy ingredient, however it’s far lower in saturated fats compared to butter or coconut oil. So even though it’s a processed food (as is butter and coconut oil) it can still be a better option for overall health.

Lastly, I’ve added some ground flax seed to this nutritious vegan crumble topping. Flax seeds are packed full of amazing nutrients including fiber and omega 3s. Vegan diets tend to be low in omega 3s so there’s (likely) no harm adding some to your dessert!

The main difference between a normal raspberry peach crisp and one that is vegan is the crumble topping. Typically, crumble topping calls for butter which is not vegan.

The simple substitute is to either use vegan butter or vegan margarine. I use margarine for a couple reasons. As noted above, it has a better balance of fats. It’s also much cheaper and I’m quite frugal with grocery shopping so that’s a huge plus for me.

Margarines in Canada also have mandatory fortification with vitamin D. Most foods (vegan or otherwise) lack vitamin D unless it’s fortified, so using margarine can be a way to increase intake of this essential nutrient. 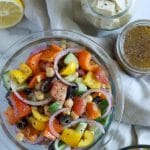 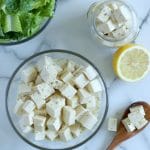 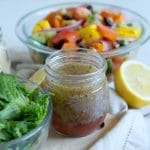