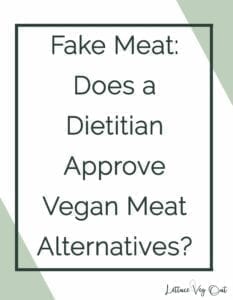 What is “fake meat” and why would someone want to consume it? The global market has recently exploded with products that mimic the taste and texture of meat, but don’t contain animal products. These processed vegan meat alternatives help negate the impacts of consuming meat while being equally satisfying, but some people are resistant to the idea. Many critics of the fake meat movement bring the argument back to “are they even healthy?”

As a vegan dietitian, I have some very strong beliefs about vegan meat substitutes. Continue reading to discover:

From my perspective, it seems there are two primary drivers behind the growing trend of meatless meat products:

Essentially, the point of meatless meat is to give people a more ethical option when it comes to selecting food. Whether it’s ethical concerns about animals or the environment, people are demanding a change in the current food system and companies are responding.

What I find interesting is that many fake meat products aren’t specifically being targeted toward vegetarians or vegans. They’re often marketed to the masses as an option that competes directly with animal products.

Since consumers are more conscious of where they spend their money, people who aren’t vegetarian or vegan may also be compelled to try these alternative products. If they enjoy them, why not make the more conscious and ethical choice moving forward?

Why Would a Vegan Eat Meatless Meat?

This is an extremely common question. I often respond by explaining that most people who follow a plant-based lifestyle grew up eating meat. They enjoyed the taste and texture of animal products but now refuse to consume them (typically for ethical reasons).

Why shouldn’t plant-based eaters enjoy a tasty product that mimics what they grew up eating?

When I first went vegetarian (around 2010) the meatless meat market was small and the products were less-than-ideal. I rarely found a veggie burger I enjoyed let alone any other meatless meat product. I distinctly remember saying “I didn’t become vegetarian to eat fake meat”.

At the time, I was under the impression that “true” vegetarians didn’t eat these fake meat products and that I was somehow less of a vegetarian if I did eat/ enjoy them. I frequently see this type of messaging promoted, but feel this mindset is wrong.

Fake meat products (and fake milk/cheese etc.) are often called “transition foods”. In other words, foods someone eats while they transition to a plant-based diet or vegan lifestyle. This implies that these foods shouldn’t be consumed past a certain point in the transition.

If you’re in this for the ethics, eat what you enjoy and what works for you. If you don’t enjoy fake meat, that’s fine, but there’s no need to make others feel less-than for their food choices.

I can relate to not enjoying foods that are too reminiscent of animal products because they make you think you’re eating the real thing (which can be off-putting). Right after my transition to becoming vegetarian, the thought of meat made me nauseated.

Vegan Meat Substitutes: Are They Healthy?

While most people can recognize that fake meat products are better for animals and the environment, one thing is less clear: are they healthy?

I personally don’t like classifying food as healthy or unhealthy. All foods can fit into an overall balanced dietary pattern and lifestyle that promotes good health.

When it comes to fake meat there’s such a variety of options it’s impossible to make a generalized statement about whether they are healthy or not. For me, these products aren’t intended to be a more healthful choice; they are meant to be a more ethical option and compete with traditional meat products. This means that many of the fake meat products are high in protein, fat and saturated fats in similar amounts to the meat they are trying to mimic.

What does this mean for health? To me it means that while there may be slight health benefits to the fake meat products, they aren’t massively different from a nutrition standpoint compared to the regular meat products. The reason I say they’re a bit healthier is they don’t contain some of the compounds found in animal products that may be harmful to health.

I don’t think the fake meat products that compete against traditional meat are intended to be healthy. I think they’re meant to be enjoyed in a similar way/ amount as the traditional meat. This means you can certainly enjoy them but they might not be the best product to base your diet around.

Does it Matter if Plant-based Meat Isn’t Healthy?

I believe in living a balanced lifestyle and enjoying whatever foods make me feel my best. Sometimes feeling my best means eating something that is technically less nutritious for the enjoyment of it.

If the purpose of fake meat products are to compete against meat and help decrease animal suffering and climate change, then I say the nutritional value is not relevant.

However, I recognize the fact that we can’t take nutrition out of the discussion because when someone makes a choice about what to eat, they often consider their health. So, I generally say that fake meat products are no more or less healthy compared to “real” meat. There’s room for argument both ways but I maintain that for me, the point of these products is to lessen the harm to animals and the environment.

If health is a concern, I’d also say that consuming large amounts of meat isn’t ideal either. For people using health as their argument to not consume fake meat, it tends to fall flat.

Please note: I’m talking specifically about fake meat products trying to mimic “real” meat (i.e. the products that have a similar nutrient composition to meat). I’m not talking about veggie burgers made from beans, chickpeas, rice, vegetables etc. Certain veggie burgers (or other “veggie” products) may be more nutritious compared to meat products, depending on what they’re made from.

The Rise of Plant-based Burgers: Is This Trend Good or Bad?

Up to now I’ve talked about fake meat in general but the biggest trend in the fake meat market is plant-based burgers.

I love that this has become a trend and I think it’s more than just a trend. I believe plant-based meat products are here to stay. Every time a new restaurant announces their adoption of a plant-based burger (or other vegan protein option) I’m excited.

While there’s room for more than just burgers in the fake meat market, having these options accessible and fairly cost-competitive is great (in restaurants at least; fake meat is definitely more expensive at the grocery store). It allows vegans to enjoy meals out with friends and makes plant-based foods seem more normal.

As a vegan, I think the more people that eat plant-based options, the better it is for animals. If you’re concerned about the environment, most experts agree that reducing consumption of animal products is a great place to start.

As a dietitian, I still promote eating a diet that’s based around whole plant foods balanced with enjoying what we eat and our overall life!

Fake meat may or may not be healthier compared to “real” meat. It depends on your personal definition of healthy and what specific products you consume. Regardless, I personally don’t think health is the point of the rise of fake meat products. To me, fake meat is intended to compete directly with “real” meat.

This is better for animals and the environment which are two things I care deeply about. Therefore I’m glad to see this trend take off. As a dietitian, I promote a balanced approach to eating that allows for enjoyment of food. A plant-based burger can certainly fit into that definition of a healthy lifestyle!

Interested in learning more about vegan health, nutrition and cooking? Sign up for the Veg Out newsletter and get the latest content from a vegan Registered Dietitian!

Disclaimer: always speak with a doctor before changing your diet. Please read our full website disclaimer.